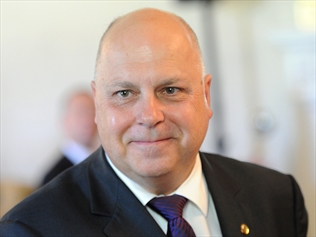 Tim was elected to the Victorian Parliament in 2006 and is the state member for Werribee.

Tim previously served in the Bracks and Brumby Governments as Minister for Roads and Ports, and later added Major Projects to his responsibilities. He was also previously Minister for Resources in the first term of the Andrews Labor Government, overseeing a period of significant growth in that sector.

As Minister for Roads, he delivered EastLink, oversaw the M1 Upgrade, the construction of the Deer Park Bypass and Geelong Ring Road, completed the upgrade of the Calder Freeway to improve links to Bendigo, and was responsible for commencing the Peninsula Link project on the Mornington Peninsula.

In the Major Projects portfolio, he was responsible for big ticket items like the development of AAMI Park, the Melbourne Convention and Exhibition Centre, as well as the Melbourne Recital Centre and Melbourne Theatre Company’s auditorium.

Tim’s first budget as Treasurer in May 2015 delivered the biggest education budget and investment in public transport in the State’s history. His second budget in April 2016 included the single biggest school capital investment in Victoria’s history as well as the new Metro Tunnel. His third budget in May 2017 included an unprecedented $1.9 billion investment to address family violence.

The 2019/20 Budget delivered a suburban transport blitz, universal three-year-old kinder, and the solar homes initiative, while maintaining a strong and steady economic approach.

Tim has played a significant role in the delivery of the $1.7billion Economic Survival Package and $2.7 billion Building Works Package that are designed to support Victorian businesses, households and workers to get through to the other side of the coronavirus pandemic.

The Victorian Budget 2020/21 – his sixth – invested an unprecedented $49 billion to rebuild Victoria and ensure Victorians remain at the heart of recovery, supporting massive jobs growth and delivering the infrastructure that communities want and need.

Tim delivered his seventh Budget for 2021/22. This Budget, Creating Jobs, and Caring for Victorians, delivers more than $26 billion in initiatives, supporting an average of 38,000 jobs every year over the next four years.

That includes investing a record $3.8 billion to build our broken mental health system from the ground up, while also creating 3,000 jobs.

This once-in-a-generation investment will transform the way mental health support is offered in Victoria, with early intervention, a dedicated stream of care for our kids, and the recruitment of thousands of new mental health workers.

Record jobs, strong growth and return to surplus tell the story of Victoria’s remarkable economic recovery from the global pandemic. Victorians are optimistic, visitors and students are returning, business are busy, and jobs are growing. Our economy is bouncing back from the pandemic.

The 2022/23 Victorian Budget – Tim’s eighth – keeps that momentum strong with new investments from the Andrews Government.

This Budget, Putting Patients First, isn’t just about getting us back to where we were – it’s helping build a stronger and fairer state. These projects and investments will help to create and secure well-paid jobs for Victorians right now.

Victoria’s outlook is bright – we’re building big, we’re bouncing back, and we aren’t slowing down.

On a personal level: Tim studied Arts/Law at the Australian National University prior to taking up roles with the Federal Firefighters Union and the Storemen and Packers Union. Tim still holds a legal practising certificate and is also a Graduate of the Australian Institute of Company Directors.

He later served as Assistant Secretary of the ACTU before taking up a position as Chief of Staff to Premier Steve Bracks.

He is married with two children and is a passionate supporter of the Werribee Tigers, Western Bulldogs, Melbourne Storm, Melbourne Victory and the Melbourne Vixens. In his spare time, Tim works towards fulfilling a dream of being an accomplished chilli farmer.